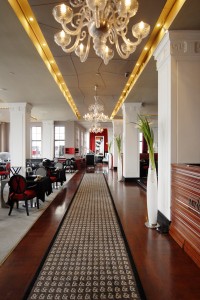 Up until about a decade ago Shanghai was no one’s choice for luxury travel.

Sure, see China they said: visit Beijing to sample some culture, then afterwards catch some shopping and fine dining in Hong Kong. Shanghai, if it was visited at all, was the domain of businesspeople. The city of before, of pre-War, of pre-revolution, had been forgotten in a fit of global amnesia. What a mistake to take that attitude today…. Shanghai has been born again, bigger, better and with more bling than ever before.

Any visit to Shanghai demands a walk along its riverfront. This is the famed Bund, actually the original British Concession, started after the end of the first Anglo-Chinese Opium War. The Huangpu River rolls and bends, causing the numerous barges and container vessels to steer a gentle curve around Pudong Point. The river has little care for the drama of its past or one wonders, the luxury of its present. Though some of the original Occidentals arriving in 1840s Shanghai may have dreamt of making their fortunes here, not a one of them could have imagined just how amazing their new city would be some 160yrs later. From offering practically no international up-market goods in the 1990s, today Shanghai is a dining and shopping paradise for all who visit. And with the opening and success of numerous top-end hotels this fun is on offer for anyone to taste.

Begin your Shanghai holiday in one of these fantastic hotels. Perhaps it is the Japanese-inspired minimalist-yet-luxurious, interior design of the Park Hyatt. This hotel has just celebrated its third year anniversary. The highest hotel in mainland China, set atop Shanghai’s thrusting and tallest building, remains a unique temple to modernity. The best-trained staff members in town seemlessly guide you from spa to pool to enticing dining options. Back on the colonial-era Bund lies a gilded art deco re-mixed palace: the Peninsula. The sprawling property that even includes the old British Consulate is the first new building on the famous waterfront in 62years, and it bleeds luxury from each of its individually designed public and private rooms. Many terraces on different levels give one the option of being a part of the landscape, or standing above it all. At the other end of the Bund is another must-see, the Waldorf Astoria. Using their brand in Asia for the first time, the hotel could not have chosen a better location. The 1910 building was the home to the exclusive – only wealthy British taipans need apply for membership then – Shanghai Club. This historic property allows residents and diners to enjoy the best of this opulent past, while the new tower and restaurant section is the definition of modern comfort. But these are just three of the 5-star hotel jewels awaiting you in China’s number one city.

In the western part of the French Concession there are two other areas that should not be missed. The first is Tianzifang, an ever-growing bohemian village of shops and restaurants. Unlike Xintiandi with its larger restaurants and piazza-style spaces, Tianzifang has sprung up organically amidst an un-renovated residential community. Thus rental prices are low enough to allow the really creative to try their hand at entrepreneurship. Expect to find Shanghai’s most interesting shopping here, especially if you prefer straying from the safety of internationally available products. Further to the west is Ferguson Lane, home to Franck, one of the most-loved bistro-styled restaurants in the city. The streets around Ferguson Lane are still largely untouched and residential, giving an authentically romantic feel to your post-prandial constitutional stroll.

In a city as large as Shanghai there is no way of course to see everything. Thus hiring an expert to deliver you the parts you want to see is a requirement for those in the know. Luxury Concierge China  provides anything you could need during your stay to make it a memorable and multi-faceted one. Their local knowledge is unparalleled, leaving you with the confidence to say you’ve truly been to Shanghai.

Dining in the Stars: The Ritz-Carlton, Westchester in New York
Discover Montegrappa Genio Creativo series limited edition inspired by sculptor Antonio Canova
Kate Winslet Launches the Exclusive Flagship Heritage by Kate Winslet Timepiece in Paris
The Evolution of the Super-Luxury Lifestyle with Rolls Royce in the Lead
Museum Moment: Cultural and Religious Diversity of Ancient Middle East at The Met Museum
Famous Mothers and the History of Mother’s Day
The True Wealth Project Podcast Presents: How to kick-start your legacy
Antique Perpetual Clocks
Share this:

EAT LOVE SAVOR® is a different kind of luxury lifestyle magazine and bookazine for lovers of timeless luxuries. We are a mix of inspiration and teaching about true luxury. We convey taste and elegance. And inspire you to be a part of an elegant lifestyle. Both an online magazine and a luxury print bookazine - a collectible, timeless coffee-table publication designed with a high quality, artistic sensibility & zero advertising. Our online magazine is blog style. Our very special high end book-style magazine is unlike any magazine you've ever seen or experienced! A timeless immersive luxury experience with content relevant years after publication. EAT LOVE SAVOR® is named on the Top 5 Luxury Magazines (Notable Consideration) a list that includes Bloomberg and listed in the Top 10 Best Sites for Luxury, a list that includes Louis Vuitton and Dolce and Gabbana; Listed as a top luxury lifestyle magazine to follow 2018, 2019 and 2020.

An Homage to Culture With A Cinematic Flow: The Baku Flame Towers In Azerbaijan

A look inside our luxury bookazines