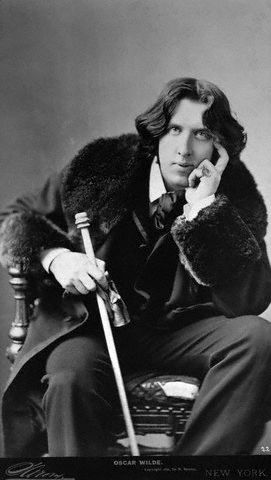 Born on the 16th of October 1854 in Dublin, Ireland, Oscar Wilde was to become one of the most well known personalities of his day, and one of the most successful playwrights of late Victorian London.

The second of three children, Wilde was born to intellectual parents who were both professionally and socially quite successful. From 1871 until 1874, Wilde studied at Trinity College in Dublin and was an incredible student, winning scholarships as coming first in his class in his first year of studies. In 1974, he moved to Magdalen College in Oxford to continue his academics. While at the school, Wilde became known as an extremely flamboyant dresser and played a large role in both the aesthetic and decadent movements.

After graduating from Oxford, Wilde began living in London as a bachelor. He published a book of poems that was well received. In 1882 he left for America to carry out a series of lectures across the country. The lectures were extremely successful but he also received harsh criticism for his dress, and personality. After returning from America, Wilde moved to Paris and was soon engaged to Constance Lloyd, whom he married in 1884. While they had two sons, their marriage was strained.

From 1886 to 1891, Wilde engaged in journalistic endeavors, and was discovered to be quite a talented journalist. Through this medium, he wrote about his perspectives on art, literature and life as a whole. Wilde soon became the editor of the magazine The Woman’s World and he reformatted the publication to include articles on parenting and politics. In 1889, he moved on from magazine editing, to working on prose. His most famous works include The Picture of Dorian Gray, and The Importance of Being Earnest. The former was Wilde’s only novel, published in 1890, and the latter a play performed initially in 1895.

Wilde was arrested in 1895 because of his apparent relations with other men, and spent two years in prison. Upon his release, he began seeking spiritual renewal. He spent the next three years of his life in relative exile, and he passed away in 1900. Though he may have had a tragic end, Oscar Wilde was a man who spent his life creating brilliant and progressive works, and was also someone who also sparked change and could never be forgotten.

EAT LOVE SAVOR®️ International Luxury Lifestyle Magazine and Bookazine, established in 2010, is a luxury lifestyle platform unlike any other. Focused on connoisseurship and appreciation, we are a foremost advocate of intelligent, informative, premium editorials, interviews, and features with a feminine touch, invigorating and guiding readers through a world of highly curated luxury goods, services, and experiences. We only cover the high end of true luxury. Our voice and lens is feminine and we’ve created an immersive world filled with beauty, positivity and love - an ad-free oasis where you can be entertained and informed in refinement and elegance. A Vision in Violet, 25 Carats of Grace and Beauty EAT LOVE SAVOR®️ International Luxury Lifestyle Magazine and Bookazine, established in 2010, is a luxury lifestyle platform unlike any other. Guiding you through a world of high-end, highly curated true luxury goods, services, and experiences. Focused on connoisseurship and appreciation, we are a foremost advocate of intelligent, informative, premium editorials, interviews, and features with an invigorating, feminine lens. We’ve created an immersive world for you, filled with beauty, positivity and love in an ad-free oasis where you can be entertained and informed in refinement and elegance.

Shop for Fine Goods, Services and Experiences in our eBoutique available from select partners. Dismiss